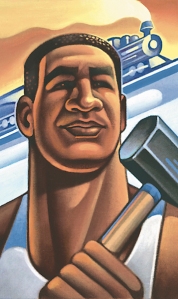 The story, of course, tells of this giant, Afro-American workingman, a steel-drivin’ man, who challenged the power of the machine, the steam drill. And who died with a hammer in his hand. A mythologically-large folk-hero, John Henry was apparently a real guy, who, according to some accounts, died in West Virginia in 1871 trying to dig through a mountain. His last words were: “Gimme a cool drink of water before I die”.

The harmonica riff is copied from Sonny Terry, one of my personal heroes.