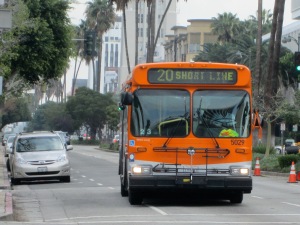 Bumba felt truly sorry for his coverage of the Los Angeles Metropolitan Transit Authority. So many times had he scolded and scalded and scrutinized the bus service, teased and taunted the L.A. mass transportation system (or lack thereof). Why was he always so rough on the MTA?

Bumba felt bad about all these posts on he had written full of snide complaints about the long waits! All those various and sundry other whinings and whelpings and wailings about the poor service!

As Bumba sat and waited for the #20 bus he felt genuinely contrite about his past treatment of the MTA. There is no such thing as a bad bus after all. Buses aren’t born bad. And of course the drivers were most all of them good people. They were good drivers. There was no reason to be so hard on them.

Bumba liked to argue – and still does – that reducing the fare to 50¢ would invigorate the system and probably even pay for itself in increased ridership. That increased ridership would lead to improved service, more frequent buses. “Build it and they will come!” If we want to save the world and not choke ourselves to death in a fossil-fueled calamity we need to use less energy.

As he wrote, a large, red truck, a heavy armored Dunbar truck pulled up and parked right in front of him filling the immediate area with its exhaust fumes.

“We gotta reduce the noxious emissions,” Bumba told himself as he got up and found another bench just a few paces up the street. “And they should have more of these benches, shaded benches too, at the bus stops. That would be another decent thing to do.”

Any extra costs (if any)(and the Federal government already funded about half the MTA budget) caused by the reduction in fares could be paid for by a gasoline tax of, say, 50¢ a gallon. In fact, a national gas tax of 50¢ a gallon would not only reduce emissions but could probably bankroll a comprehensive, commuter-friendly mass transportation system in every state.

As he wrote on, Bumba reflected that he was either writing very fast again or waiting a very long time for the bus.

What? Is Bumba going to start complaining about the long waits again???

Ah! There it is! The #20 bus! Bumba could discern its orange rooftop peeking over the Wilshire Blvd traffic horizon. (Bottom line was that Bumba liked the buses. It was a bit of a love-hate relationship, I suppose). Never mind. Here’s the bus. Bumba gotta go.

By the way, tomorrow, Sunday, Wilshire Blvd will be clear of all the noise and fumes. It’s bicycle day (CicLAvia) on Los Angeles’ grandest boulevard! No cars allowed.

“Should be cool,” thought Bumba. “The other time they did it was really interesting. A great success all around! Hey!”