Welcome to the Bumbastories Monday Magazine.

This week’s Mag features the Funny Pages, a Science Report, a couple of songs, a couple of Breaking News news flashes, and that’s about it.

Bumbastories apologizes to the real poets out there, but wants to offer some very short poems to those of limited attention span. What was I saying? Oh yeah, some short poems…..

In nineteen hundred and sixty-one

And so does forever

The shortest poem in the world

Did you hear it?

Dear Bumba, An Advice to Writers and Lovelorn Bloggers Column

I’ve been working on a science fiction novel about plants, how they take over the earth, which someone said already happened. Is that true? Anyhow, I won’t give anything away about the plot, but let me tell you, it gets pretty bizarre. I’ve been working on character development and wonder how to name my leafy characters. I wonder whether plants could have first and last names like people.

Yes. I know a lot of plants that are Herbs.

Bumbastories recommendations: Try to take it easy his week. Eat a lot of watermelon if you can, as it is very healthy.

And now a song to accompany the SCIENCE SECTION: Pick A Bale of Cotton.

“What? You mean that old Leadbelly song?”

Yes. Click to hear a recent field recording of two men (spoiler alert. It’s Bumba and Maybank) who are both out standing in their field. And, to our great regret, that field is not music. It’s a cotton field. In any case Hop Down, Turn Around Pick A Bale of Cotton.

For me, it’s a never ending story, an endless task: this attempt of mine to understand General Relativity and Quantum Mechanics! Like Sisyphus I push the cosmological rock up and down the hill. I figure that before I die I want to understand general relativity and quantum physics – or at least get a bit of a handle on one of those multiple universes out there.

I used to read mostly fiction. But now it seems I read science books and math books. Popular science books, not the serious kinds that a scientist might read, but stuff designed for the curious amateur. It seems nearly every one of these books needs to recount the history of science, starting with Galileo or Newton, and then on to Einstein’s great breakthroughs – all in order to introduce quantum theory and higher cosmology. You have to start from the beginning, see?

Like a child that seems to never tire of hearing the same story again and again, I read about the history of science. I never get too far in most these books. There are certain limits to my ability to handle complicated equations, there are a number of conceptual walls I keep butting my head against. I still don’t get it. So I go back to the beginning to hear the wonderful story again. I must confess I read the Bible in this way as well. I always start at the beginning and get lost in the desert somewhere during the Exodus. So I return to the Genesis stories again and again. Which isn’t so bad because as far as the Bible is concerned, the Genesis stories can’t be beat.

All this by way of introducing several science books that provide a good exposition of the development of modern physics.

and ALL of Stephen Hawking’s books. And please, anyone who can explain the universality of Planck’s constant, please gimme a call.

Max Born’s 1962 Einstein’s Theory of Relativity is a jewel.

The Nobel Prize winning Born graced us with a wonderfully clear and succinct exposition of Einstein’s monumental theory of relativity. It is a pleasure to read Born’s presentation of the story of modern physics, starting with Classical Mechanics and the Newtonian World System,  the Laws of  Thermodynamics, and Electromagnetism, and finally arriving at the Relativity Theory and Cosmology (as it stood in the early 1960’s). It’s a fine, fine book by a great scientist who was, of course, a major player in many of the great scientific breakthroughs of the last century. Bumbastories has assigned George Packard to do a proper book review and promises additonal updates on this book. 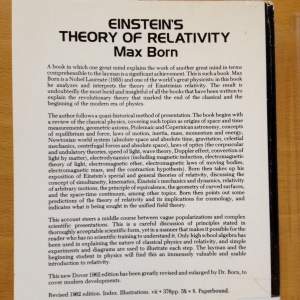 And to conclude, a song, On the Other Hand, the Randy Travis favorite, performed by Bumba and Maybank the other day.

A good week to all!