They (the teachers) used to force Shakespeare upon us when we were mere babes. I remember that Julius Caesar was of the few Shakespearean plays that I could almost follow.

Certainly to Beware the Ides of March! was sound advice for old Julius Caesar.  He definitely should have exercised a bit more caution on March 15. However, for the rest of us, us non-patricians, us plain old guys, I don’t think the Ides of March is anything to get our knickers in a knot about. I believe it’s quite sufficient to just keep our wits about us and to be approximately equally careful at all times of the year. Why be careful just on March 15? Why should March 15 portend anything? And what are ides anywaze?

Firstly: ides in Latin just means the middle of the month. Two thousand plus years ago, the Romans didn’t divide their months into thirty numbered days, but into three reference points – and ides was the middle one. Back in the day, even before the Romans, the Ides of March was like New Year’s Eve, or New Year’s Day. The first full moon of spring announced the new year – replete with religious precessions through the streets of Rome. There were sacrifices of sheep. Bonfires. Mass gatherings. The whole nine yards. It was a time of potential political unrest. Imagine New Year’s Eve in the streets of ancient Rome. A definite “Oh oh” if you’re Julius Caesar. Also an oh oh if you happen to be a sheep. Not a meh meh. So, as we hit March 15, beware the ides of March if you happen to be a sheep. Otherwise, it should be cool.

In the ides of March spirit, here’s another contribution to the St. James Infirmary Compendium, dedicated to the memory of the great Cab Calloway. Check out the unbelievable Cab Calloway’s U Tubes. 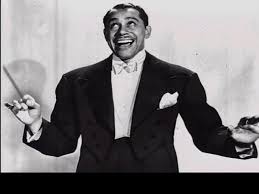